Episode 6 of Survivor Samoa was certainly one of those gripping moments you could not forget. Russel S. nearly died because of too much exhaustion (dehydration to be specific) and I kept wondering why he still chose to participate in the challenge when he was already feeling ill.

As I see it, Russel S was too hard of himself that moment. He’s the leader and he’s probably too concern what his other tribematess thought when he chose not to play. I don’t know how this episode turned out if Russel S chose to sat out and gave the responsibility to Dave instead.

What do you think?

Continue Reading
Posted by SurvivorDean at Sunday, October 25, 2009 No comments:

This episode was quite predictable. Galu was dominating again. All nine members were powerful. Each one of them was doing their own thing to win a challenge.

During the Reward “Gross Food” Challenge, Galu was in fire. They were clearly winning.

Continue Reading
Posted by SurvivorDean at Saturday, October 24, 2009 No comments:

Before coming to Samoa, let me visit the events in Palau.

Marvin Kiefer was already ousted in SURVIVOR PHILIPPINES Season 2 and became the first member of the jury.

This strategic move was expected but I kept wondering why Marvin didn’t do anything to advanced further. No doubt, Marvin was a physical threat but it does not mean he couldn’t play a social game.

Back in SURVIVOR AFRICA, Ethan Zohn did not dominate the challenges but he did not receive any votes against him. He was a threat, yes but his techniques to escape the cut was working well and that’s the reason why he won it all.

That’s the biggest mistake in Marvin. His emotions devoured him. He chose to be alone than get back inside the camp, ask questions and let the numbers rescued his fate.

Galu ended their winning streak in the Immunity Challenge but that’s okay,

Continue Reading
Posted by SurvivorDean at Sunday, October 11, 2009 No comments:

It all started with these;

Shaun, a public relations staff at Manila City Council Office and the only remaining castaway with a better-half, aced the very first individual “Fire, Land and Water” Immunity Challenge.

This is unbelievable, folks. Usually, two or three castaways on my list are already out the competition before the merge but now, it’s totally a different story. Last night, Survivor Philippines Season 2 opens its second chapter and yes, all four of my pre-show bets and two out of four early wildcards round up the Sonsorol, their new tribe’s name.

CONTINUE READING
Posted by SurvivorDean at Tuesday, October 06, 2009 No comments:

“I have no intention of quitting whatsoever, but I’m willing to do just about anything to get rid of that guy right now”

Those are words from Jaison. He wanted to oust Ben, even calling him “calling the cause of their tribe’s dysfunction.” Jaison was not swayed by Mick and Russell’s advice to gun for Ashley instead.

That’s it, Ben’s arrogance during the Tribal Council stunned his tribemates and KO him (6-1).

CONTINUE READING
Posted by SurvivorDean at Monday, October 05, 2009 No comments:

While there are numerous unexpected upsets in Womens Tennis in Tokyo, the top four seeds are having a great time in Kuala Lumpur. 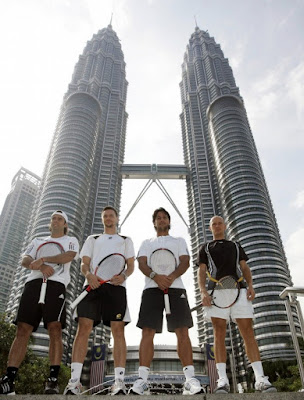 Thanks VerdascoNews
Posted by SurvivorDean at Saturday, October 03, 2009 No comments:

Kohli: The German to Watch Out! 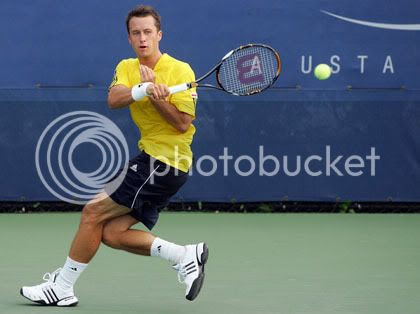 Philipp Kohlschreiber did well in Open de Moselle in France. (Sorry if the picture is not related to his win, that photo was taken from ATP TENNIS BLOG during the US Open Series)

Kohli received a bye during the first round but it took him three sets to defeat Bjorn Phau of Germany in the second round (4-6, 6-3, 6-2). An easy win in the quarterfinals against Russian's Evgeny Korolev but Kohli struggled in the last four against Paul-Henri Mathieu (FRANCE), facing a tiebreaker in the first and need to advanced two consecutive games to sealed a win in the second. He won the second set during the finals with Gael Monfils (6-3) but couldn't make a repeat in the deciding.

But that's fine. Kohli was the runner up and probably earned the title as the next German to watch out.

Personally, Kohli became a household name when he knocked out Sam Querrey and Novak Djokovic in straights sets at different grand slam surfaces, both in 2009 (AO Hard and RG Clay, respectively). Even the hard-hitter Fernando Verdasco (6-4, 6-2, 1-6, 2-6, 8-6) was left in frustration during the quarterfinals of Davis Cup (Spain VS Germany).

Continue Reading for more interesting videos about Kohli.
Posted by SurvivorDean at Thursday, October 01, 2009 No comments:

SurvivorDean
This blog articulates my interests, my insights, my health problems and everything worth discussing of. I'm not a very good listener but I'm an open-minded person. You can talk to me about everything. So, if you have some questions or any subject matters you want me to explain, don't hesitate to give me a buzz. Thanks for visiting my blog!